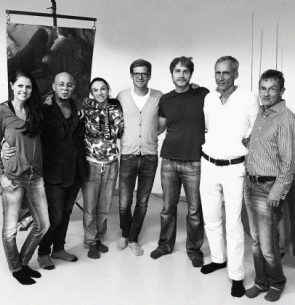 YVES PEITZNER is a creative director based in Munich. He studied art, design and filmmaking in London where he also founded his first production company.
Back in Germany, he set up one oft he first agencies for viral marketing and produced award-winning campaigns, installations, music videos and image-movies for brands and artists from all over the world.

Driven by the idea to create unique and innovative brand experiences that cross the border between arts and commerce, he now specializes in the concept and design of interactive installations.

His productions fuse art, technology and branding on a whole new level and let people get in touch with brands like never before.

Yves Peitzner works with a network some of the world’s finest creative talent & thinkers from various fields such as art, graphic & motion design, film, creative coding & programming, architecture and music.

Dali Touiti, born in Tunis, lives and works independently in Germany since 1999.

In 2002, he introduced himself to the Munich audience as dancer and choreographer with three choreographies at the Metropol Theater. In 2003 and 2005, he received project funding from the City of Munich for “Fliegen will ich/This way or another” and Sartre’s “Geschlossene Gesellschaft”. Ever since, he presented numerous other works, partially funded by the City of Munich.

As lecturer, Dali Touiti has worked on various projects involving kids and youths, and he also received a teaching assignment for “TanzPerformance” at the Munich Academy of Fine Arts.

was born in France. She received a scholarship for the “Académie de Danse Princesse Grace” in Monte Carlo. Afterward, she signed five years with the Bavarian State Ballet in Munich. Then she started working as a freelance dancer and has ever since appeared at numerous German theaters including the Stadttheater am Gärtnerplatz München, Theater Erfurt, Theater Trier, Stadttheater Klagenfurt, Düsseldorf Opera as well as in international tours and projects. Elodie is currently involved in several of the National Bavarian Opera’s productions, and she can be seen dancing Wagner’s RING (Rosamund Gilmore) at the Leipzig Opera House.

In 2015, she choreographed RUSALKA at the Pasinger Fabrik München, directed by Julia Dippel.

Swiss-born Anja Staubhaar studied Contemporary Dance in Bern as well as Musical in Munich. After receiving her diploma in 2009, she worked at the Freies Landestheater Bayern, sang several seasons at Alfons Schuhbeck’s Teatro dinner shows in Munich and Freiburg, danced at the Cologne Opera and the Regensburg Theater, and played in various independent theater and musical productions. Since 2011, she is part of the National Bavarian Opera’s ballet crew, participating in roughly 25 different operas (including DIE SOLDATEN, BABYLON, ARIADNE AUF NAXOS, CARMEN, Wagner’s RING, DIE FLEDERMAUS…)

In the 15/16 season, she also danced in the opera RUSALKA, choreographed by Elodie Lavoignat for the Pasinger Fabrik München.

Who are you, really? What part of your appearance is projection, what part is content, and what part is mask or packaging? To what extent do external influences distort or modify the self-image and thereby shape one’s own vanity? This topic is projected by DISTORTED VANITY – like a picture puzzle between one’s own authentic-physical […]